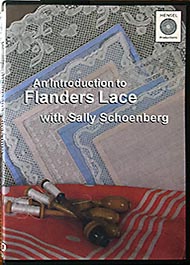 An Introduction to Flanders Lace
with Sally Schoenberg

Full details for ordering, shipping and payment
of all our DVDs can be found here

Full details for ordering, shipping and payment of all our DVDs can be found here

Sally Schoenberg has been teaching lacemaking in Alaska, the Pacific Northwest, and at IOLI conventions since 1991. Her greatest enjoyment, second only to making lace, is seeing a student go from frustration and bewilderment to “Ah! Now it makes sense!”

Modern Flanders lace is a 19th century revival of a five-holed grounded lace that was made in the 1600s in many parts of lacemaking Europe. The Flanders lace working diagram can be particularly confusing. At many pins, a pair of bobbin pairs is worked; and, the frequent exchanges of passive and worker pairs crank up the level of confusion even more. In this video, Sally tames the diagram. She shows how to identify the elements of modern Flanders lace on a diagram and how to use those components to make a piece of Flanders lace. In this program three edging patterns are used to teach the essential techniques: 5-hole ground, half of a ground stitch, joining in two times, inputs, outputs, snowflakes and the overlapping finish. The skills learned can be used to make the many old and modern Flanders patterns that are listed in the included book resource list.