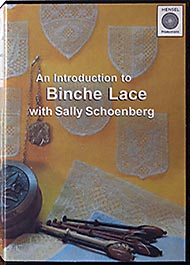 An Introduction to Binche Lace
with Sally Schoenberg

Full details for ordering, shipping and payment
of all our DVDs can be found here

Full details for ordering, shipping and payment of all our DVDs can be found here

In the early 20th century lace designers in Bruges revived a 17th century lace that had plait connections between cloth-stitch areas. Those early 20th century Bruges lace designers replaced the plaits with Paris ground and Flanders gound, adding elements of Mechlin lace. They drew cloth stitch areas that were more realistic and touched on images and stories that were dear to them, such as swans and canals. The result is modern day Binche Lace.

Our late 20th century designers have added immeasurably to those early designs. Today we enjoy so much Anne-Marie Verbeke’s, Anny Noben’s and Kumiko Nakazaki’s beautiful picture designs. Examples include patterns depicting the Jerusalem Church in Bruges, windows, flowers, peacocks and other birds.

All of these patterns use the Flanders features covered in Sally’s first video program, Introduction to Flanders Lace. The present video adds the elements you need to advance from Flanders patterns to Binche patterns: the Paris ground, big snowflakes, and the more complicated cloth-stitch areas found in Binche designs today.These patterns have more complicated diagrams than the Flanders patterns. This video also covers sizing patterns for different threads, from 24/3 to 120/2, a very important skill given the multiplicity of sizes of patterns from all the different designers and different publications.

Sally Schoenberg, now living in the state of Washington, has been teaching lacemaking in Alaska, the Pacific Northwest, and at IOLI conventions since 1991. Sally’s goal in this video program is to teach you what you need to know to make the beautiful Binche designs by our beloved designers from Belgium and Japan.